Currently U.S business hours. I pay for and receive internet speeds of over 400 Mb/s consistently. I've tested the download speeds parallel to running flexsim download. The download speeds are perfectly fine, except for flexsim, which is running at a stable 40-45 kb/s. Horrific dl speed, which is not caused by anything on my side. Please fix your problem.

When I download flexsim, it opens directly in the Healthcare version. How do I solve this.

the newer versions of FlexSim have the HC environment integrated with FlexSim's standard software and you can switch between the two. At first start after installation, FlexSim should have asked you to select your preferred environment as a default for further starts. However, you can always change that in "File/Global Preferences/Environment".

To change between the two while using FlexSim, there is a button in the top right corner: 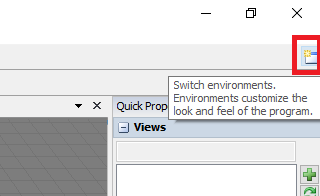 Does that solve your issue?

A general advice: You should not ask another, completely unrelated question within a different post. New questions require new posts.

For @Matvey M, @Axel Kohonen, and others who have recently had downloads slow down to KB levels.

The frustrating thing has been that we have not been able to duplicate the slow speeds. Some users experienced a poor download speed while at the same time someone else in another location was still getting double digit MB download speeds.

My best guess at this point is a peering issue. Internet service providers enter into peering agreements wherein they agree to send data across each other's networks for zero or low costs, at least when the amount of traffic sent by both networks is roughly equal. However, if one of the networks sends much more data than the other network, the lower sender may decide that the relationship is not beneficial and charge money to send the other ISP's data, or throttle the speed. As nearly as I can tell, this is probably the case.

This morning using a VPN I was able to test download speeds from multiple countries. Some countries give me double digit MB download speeds, while others stay in the KB, even though in all cases my VPN endpoint is hosted in a datacenter with a fast Internet connection. I can only assume that peering arrangements are causing the problem, since obviously our server is working properly from one location, but slower from another. This has not been the case in the past, but I suppose even if it went away it could happen again.

The solution here is for us to change hosting providers, though there is no guarantee there wouldn't be future conflicts there, or to provide our downloads on a content delivery network. I've started implementing the latter. As of right now, our downloads are coming from a new download server, files.flexsim.com, with the original account.flexsim.com as a fallback. Eventually I'd like to add more servers around the world and allow the individual user's browser to determine the best download server based on their location. That will be in the works in the future, but for now at least we have the two file servers.

If @Matvey M, @Axel Kohonen or others have a moment, I'd love if you could test download speeds once again. Hopefully you'll get multiple MB download speeds, and in the future as we get file servers in Europe and other locations, perhaps users worldwide will have a much faster download experience.

Thanks for your patience, and I look forward to any feedback.

Now I get around 5.5Mb/s so clearly better than before.

Resolved problem by downloading different software called: anylogic. Not deleting post because its important for flexsim to know that their servers are being utter trash.

9 People are following this question.