May I use processflow to control agv and also show agv traveling on GIS map?

May I use process flow to control AGV traveling on network, at the same time I would like to show agv traveling on map?

My test result is that agv could only be connected to a cp or map at the same time. I think this is because agv can only listen from one side at the same time(which is the red line).

What I want is control agv by process flow, and I want to use map is simply because I want to show it up on map if this is possible.

Felix Möhlmann · Jan 14 at 09:53 AM
Do you want to mirror the movement along the agv paths on the map (agv travels both on the path and on the map at the same time) or do you want to travel separate steps with the different methods? For example move some distance along the agv network, then switch to the GIS map.
0 Likes 0 ·

What I intend to do is mirror it!

I have seen our country flexsim distributor demonstrate a simple example that used GIS functionality previously. It’s a simple model has only a fromstation and a tostation, I saw them use GIS, then we could see taskexecuter traveling along the map.

Now I’m building an agv model traveling that is traveling through several plants connecting each other. So I’m thinking about trying this tool to just demo agv traveling on agv network, because controlpoint can be a location, so I suppose this could work.

However, I’m still not sure about what GIS and Map module’s main functionality. I have seen some examples use GIS to calculate cost, but haven’t seen examples from this forum use network and map at the same time. Am I misuse this tool?

The GIS map is mostly intended for supply chain simulation, modeling transports over large distances that with relalistic routes that would otherwise be hard to accomplish in FlexSim.

As you noted, it is not possible for a task executer to be connected to more than one navigator at a time. My best idea that incorporates the map is to simply have a copy of the task executer duplicate the travel tasks on the map.

For this, the distances and travel times of the connections should be set to align with the actual model. 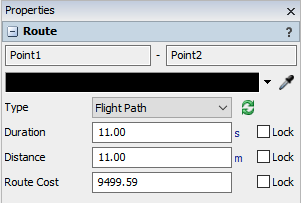 Then duplicate the travel activities in process flow, setting one to not wait until completion, so both tasks are started simultaneously. As the GIS map does not take acceleration/deceleration into account, the movement will not be completely synced though. Also, the agv travelling on the paths stopping due to traffic of other blocks will not be represented on the map. (Although you could try to listen to state changes of the original agv and stop the map copy when it enters the "blocked" state).

Another idea would be to built your own "minimap". In it's PreDraw trigger (before a new picture is rendered) a copy of the agv checks the location of the original relative to a plane (yellow in the attached model) and sets it's own location inside a different plane (orange) to the scaled down values of those coordinates. In the attached model, the minimap shows the movement of the agv in a 1:10 scale.

Because it simply copies and scales the coordinates, acceleration and stops will be accurately copied as well. The plane could be made invisible and placed beneath the map to have the miniature copy seemingly move around on it.

Edit: Replaced attached file with the correct one.

@Felix Möhlmann Thank you for your prompt reply. Your method is very cool. I will try to accomplish this in my model.

15 People are following this question.

Is it possible to add a point in map through FlexScript?

Get distance between two points in GIS