FlexSim releases have names like “FlexSim 2016 Update 1”, with corresponding version numbers in the format year.update.bugfix.

New versions of FlexSim are released on a loose schedule:

If this is a first time install of the FlexSim software, you can double click on any .fsm file and Windows will ask you what software you'd like to open .fsm files. In the program selection scroll down to the version entitled Flexsim Version Selector. This application will automatically open any .fsm file in the version that the file was originally saved or created in.

Alternatively you can right click on a .fsm file in Windows, and navigate to the option Open With > and then navigate to Flexsim Version Selector from here. This will set the version selector application as the primary method for opening .fsm files in the future. 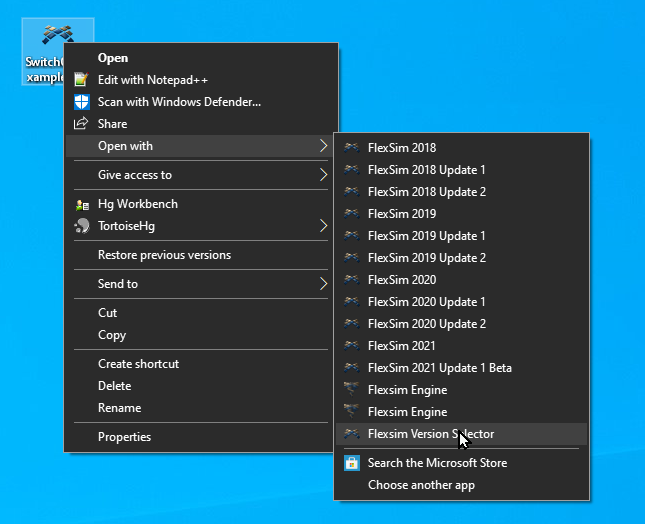 How licensing works for a given version number

Your license code should look something like mycompany.com03-A9B8C-7D6E5-F4G3H-FSENT17.1. Each part conveys some information:

To use a new year or update release, your FlexSim license will need to be upgraded.

Any license with a current maintenance agreement can be upgraded from within your FlexSim Account once there is a newer version than the license's current version.

If your maintenance agreement has expired, or if you have timed licenses, your licenses are not user-upgradable. In either case, please contact your local FlexSim representative.

If you install and run a version of FlexSim software greater than your license’s version number, that newer software won’t be licensed, but will run in the feature-limited "Express" mode. To use a fully-featured, licensed copy of the software, make sure that the software’s year.update version number is not greater than your license’s year.update version number (which is typically visible in the license code itself as the final digits of the code).

Long-term support (LTS) is a product lifecycle management policy in which a stable release of computer software is maintained for a longer period of time than the standard edition.

FlexSim maintains the year release for more than a year, overlapping with the release of the next yearly release for a few months.

Here is an example of how it works: 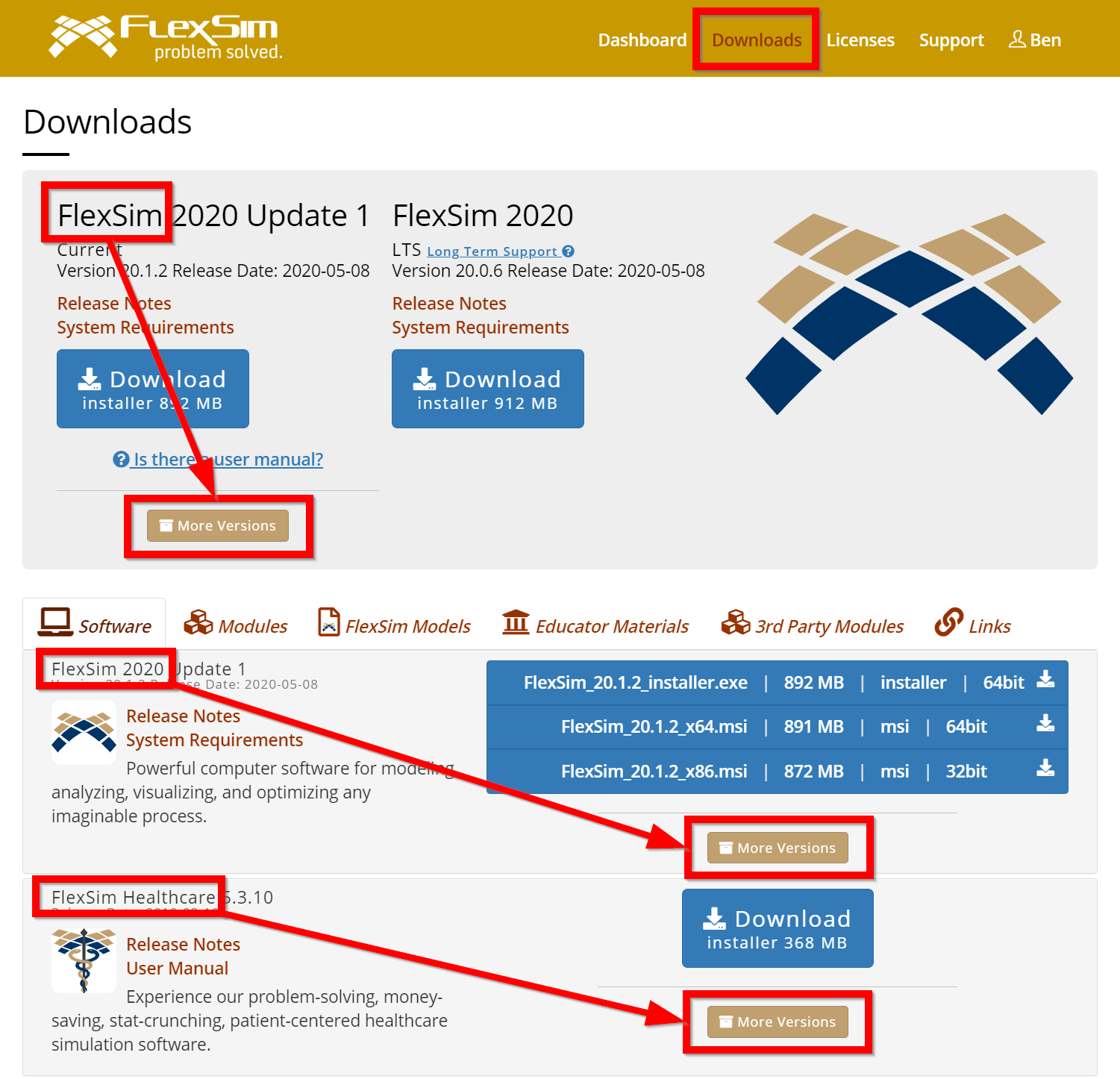 To download the version of FlexSim software that best matches your license version:

If a version of the software most appropriate for your license version is not listed on the main download page, click the More Versions button next to the product matching your license (see screenshot). This will open an expanded view with more versions of that product. Older software versions are not available for download from within unlicensed guest accounts.

If your FlexSim Account is a guest account (does not own a FlexSim license), only the latest software version is available for download. Your FlexSim Account must own a license directly, or a license owner can share their license info with you, in order for you to see the More Versions button and have access to download older versions of the software. Older software versions are not available for download from within unlicensed guest accounts.

FlexSim versions are backward compatible, meaning that when a model built in an older year.update release of the software is opened in a newer year.update version, the model is put through an upgrade process that updates the model for use in that later version: 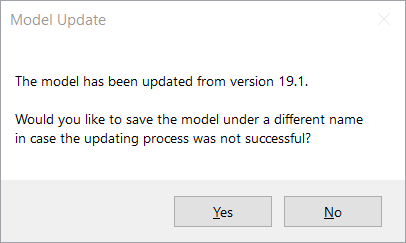 We recommend always saving this updated model under a new file name in order to preserve the original, non-upgraded model file, which you should archive for safe keeping.

FlexSim is NOT forward compatible, meaning that a particular year.update version of FlexSim does not support opening model files saved in newer year.update versions of the software. This is due to changes that are introduced to objects, data structures, added features, etc., that an older version of the software would not support or be programmed to handle.

You should use judgment and care in upgrading models and continuing model development in newer versions of the software. If your simulation team has licenses that have expired at different times, and a colleague is on an older license and you are not able to renew maintenance at this time, you may want to standardize on that lowest version number of FlexSim so that models your team creates and edits can be interoperable among teammates.

FlexSim's model upgrade functionality is fairly robust, but if you are upgrading a model from a version of FlexSim many years older than the version you're opening it in, it may be necessary to open and save the model in an intermediate version (or two). Post a new question here on Answers if you encounter any problems upgrading your FlexSim model to a later version.

Thanks for posting this. I notice the current LTS version is 19.0.5, posted on September 3. What is FlexSim's current strategy for maintaining support for LTS versions? We are trying to define our upgrade cadence internally.
Thanks!

Wasn´t there the idea some years ago to give Updates an uneven and Bugfixes an even number to make it easier for communication to figure out what version we are talking about?

And wouldn´t it further be interesting how the version numbers were before 2016!?

There have been several versioning schemes in the past. Most recently major.minor.bugfix, which applied from 5.0.0 (April 15, 2010) to 7.7.4 (January 28, 2016). Prior to that, major.minorbugfix (no dot between minor and bugfix numbers) was the pattern in use from 3.0 (February 2, 2005) to 4.52 (March 2, 2009). And way back before that, in FlexSim's early days, there was a period of time where the version number included lots of digits to reflect a version for each of: engine, project, view, and model versions.

Version numbers in the past were pretty much arbitrary. Major versions would increment whenever the dev team felt that changes were large enough to warrant a major version bump. Minor version numbers were incremented when new features were released that didn't seem very "major".

There was a system in the major.minor.bugfix days where minor versions were always odd and bugfix versions were always even. This was to try to limit confusion. If the version is 7.0.2, some users pronounce that "Seven-Two", omitting the middle Zero. Having the even/odd numbering rules was supposed to help that situation. I don't know that it really ever helped in practice. Also, we always released a Zero minor version, even though minor versions were supposed to be odd. I think there was some hesitancy to release a 7.1 without ever releasing a 7.0. So there were some quirks.

So there is some history for you.

4 People are following this article.